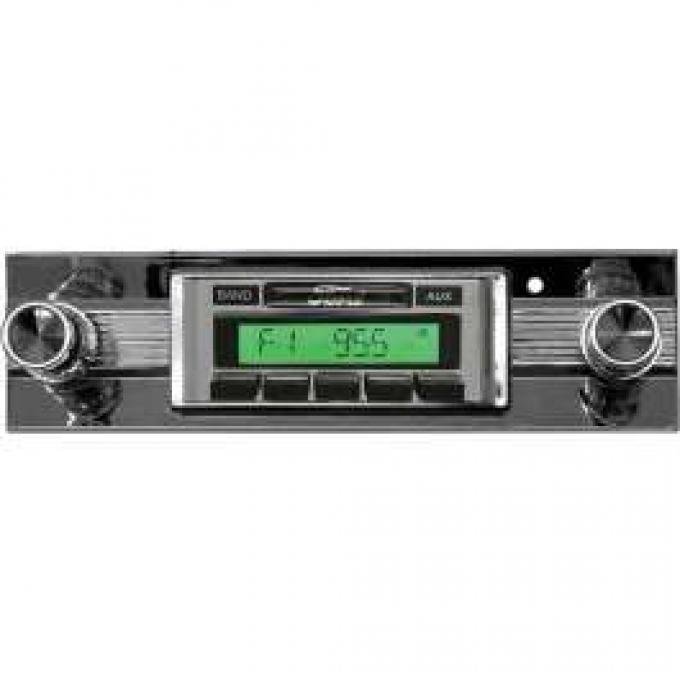 240 Watts Of Power USB Port CD Changer Controller LEC Display Electronic Tune & Volume Control Left/Right Balance Digital Clock REC Imput 16 Pre Sets (12FM-4 AM) USA/Euro Tuner The USA-630 is the pinnacle of 30 years of evolution in Custom Autosound?s quest for the perfect classic car radio. This radio has large OEM style push-buttons that give a perfect look in a classic dash. Although it looks classic it has the latest modern features. USB input on the back of the radio allows you to plug in a USB flash drive for playback of MP3/WMA song files. This jack is on an 14? extension which allows you to place it in the glove box or ash tray for easy access (no unsightly wires or plugs hanging out of the front of the radio). The new alpha numeric display (30% larger than previous models) shows the song/artist/album (id3) titles during playback of MP3/WMA files. With the built in CD controller you have complete control (no FM modulation) of the 6 disc CD changer.With 240 watts the radio should have all the power you may need, if you want more there are four pre-outs jacks on the back of the radio for optional amplifiers. The back of the radio also has auxiliary audio input for satellite radio or any portable player you may wish to use.